Daniel Wolff is acclaimed as one of Brazil’s most prominent guitarists. A versatile musician, in addition to his career as a performer, he acts extensively as a teacher, composer and arranger, which culminated in a Grammy Award.

Professor of Music at the Brazilian Federal University (UFRGS), where he created the Master and Doctor of Music degrees in Guitar Performance, and a former guest professor at the Universität der Künste in Berlin, Germany, Wolff is in constant demand to teach courses in universities and music festivals in Brazil, Germany, Portugal, Uruguay, Argentina, Bolivia, Peru, Colombia, México, Canada and the United States.

A Bachelor of Music from the Uruguayan University in Montevideo, he was later awarded full scholarships from the Brazilian government to study in New York, receiving both Master of Music and Doctor of Music degrees from the prestigious Manhattan School of Music. 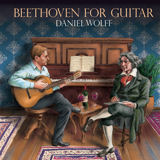 MUSIC AT THE HOSPITAL